They showed up singing. While outside the coral reef, body-surfing in breakers rolling in from the Southern Ocean, I could barely distinguish their song underwater amidst the roar of the surf.  But like a curious whisper which wakes you from deep sleep, their music cut through my watery reverie and I knew immediately that whales were close-by.  Swimming full-speed to my tender, I was already planning how I might greet these mighty sea creatures face to face, and save the unique experience for others.

I did knowingly place myself in the right place at the right time for this picture, I admit, but the luck and variables to have it turn out right were staggering. The pink of dawn still lingered in the clouds. Early daylight turned the rippled surface a light blue.  The headland background (can you see the features of her face?) permitted me to add to a series of related photos. The lagoon was calm, so I could hold the camera steadily.

The whales were snuggling together as they approached, almost as if they were emotionally attached.  Then, as the magnificent male prepared his dive, his devoted spouse blew the remaining air from her lungs with such force that my body trembled with the camera in hand, my shaking fingers triggering the release unconsciously as I mentally strained to absorb every detail.  In fact, the roar of her breathing out and in took their picture, I was just an instrumented bystander, and lived to tell the tale.

Have you ever seen what happens to the needle of a compass when you pass a magnet nearby? The whales’ passage exerted a similar invisible force, which changed my world forever. Little did I know how valuable prints of this image would become to a native people who treat these creatures as sacred:  the Fenua’s Tohora, at “te ava moa,” in ‘the sacred pass.’   People still cover their bodies with tattoos of whales, marking their skin permanently, just as they have done for centuries.  Finally, I’d found something every honest traveler wants, something personal to “give back” to our hosts, a marvelous people, the Polynesians, who have welcomed, embraced, tolerated and forgiven so many of us intruders, we who come by sea. 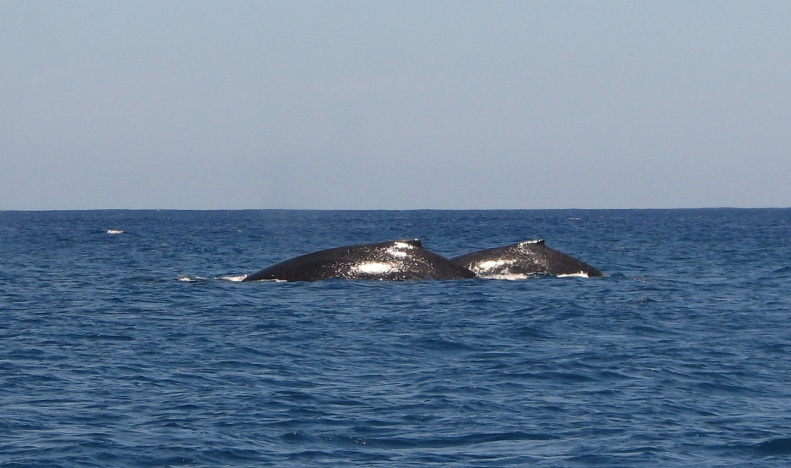 Amazing mammals.  Our humpback whales went back to sea. I’d listen for their return, and was ready when they surfaced nearby.  They may go everywhere eye to eye.